The handshake is not a new movement, in fact its beginnings date back thousands of years. Historians believe that the gesture began as a way of conveying peaceful intentions, that by extending their empty right hands strangers could show each other they did not hold any weapons and intended no harm. Although the handshake has evolved over time, it eventually became a part of commonplace etiquette and a sign of courtesy and friendliness.

However, there is so much more that goes into a handshake. The handshake is a first impression, it can be a make or break in a job interview, and it may influence whether you strike a big deal or not. The handshake can play a part in many different business decisions, which may sound silly, however a great handshake makes you appear confident, professional, and more trustworthy. A handshake is a personal connection between two people; it displays mutual respect. Even when it is impersonal, a great handshake can help convey your personality and intentions towards the other person. When is the appropriate time to shake someone’s hand? When being introduced to someone, when saying goodbye to someone, at the beginning or end of a business meeting or interview, and whenever deemed appropriate within a business context, such as sealing a deal.

There are a few guidelines to remember in order to have an unforgettable handshake. First things first, you have to be ready for it! Make sure your right hand is free. Move anything out of your right hand well before you know you’re about to give a handshake, that way you’re not awkwardly fumbling your items around. If you’re sitting down, rise before shaking someone’s hand. Have your hands out in the open rather than in your pockets – you will look more confident and trustworthy. Then, extend your right hand straight out. Don’t have your palm facing either up or down; the palm should meet with the palm of the other person. Next, you will take the other person’s hand in a firm, but not knuckle crushing, clasp making sure the web between your thumb and fingers meets the web of the other person’s hand. While keeping your hand parallel to the ground, pump your hand up and down about two or three times.

In a job interview, the handshake is crucial. Don’t spend a lot of time stressing about it beforehand, however you should always prepare. Sweaty hands can be common before a big interview as we all get nervous! However, make sure to wash, dry or wipe off sweaty hands right before your interview. One tip to impress the recruiter or interviewer is to be the first to reach out, this shows great confidence. If you follow the handshake tips as mentioned, your interviewer will be impressed with you before you’ve even said anything!

Although a handshake may sound like a simple action, it is actually not that hard to do it wrong. Let’s go into some things to avoid. First, the limp shake is a big no. This gives off the impression you’re shy or lack confidence. Try to follow the tips mentioned above and, when in doubt, just mirror the other person’s grip. There is also a “knuckle crusher” handshake that is the opposite of a limp handshake, but must be avoided as well. Again, use moderate pressure so that the handshake is firm but not hurting the other person’s hand. Another mistake people make is shaking hands for too long. Try to stick to about 2 or 3 pumps in order to avoid an awkwardly long greeting. Lastly, steer clear from the “politicians’ handshake”. This is when you’re shaking someone’s hand and then place your left hand on top. This kind of handshake is to be avoided unless it is a more personal greeting.

Don’t forget about your body language! Stand up tall as if there is a string pulling you to the ceiling and face the person directly, rather than a side stance. Make sure to speak clearly and confidently to block out any nerves you may be feeling internally. Don’t fidget, as this can be distracting to the other person and they may perceive you as nervous or shy. Lastly, as you break away from the handshake do not look down. Looking down after a handshake will also make you appear shy, nervous, or untrustworthy. Most importantly, use plenty of eye contact, this will exert your confidence in the situation. 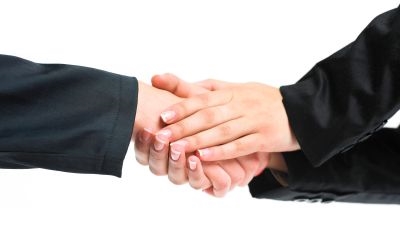 As members of Collegiate Women in Business we are lucky to have many opportunities to practice our handshakes. Whether it’s at coffee chats, monthly meetings, networking opportunities, or treks, we have plenty of time to perfect the handshake with fellow members, sponsors, and professionals before it comes time for the first big job interview and beyond. Remember, the handshake is a seemingly simple formality, however it is an opportunity to make a lasting impression, Keep these guidelines in mind and you’ll be shaking hands like a pro in no time!

CWIB Chronicles is a weekly resource for the members of Collegiate Women in Business at Virginia Tech and the greater business community. With each post, we aim to empower, prepare and connect readers with valuable content to help launch and propel their business careers.