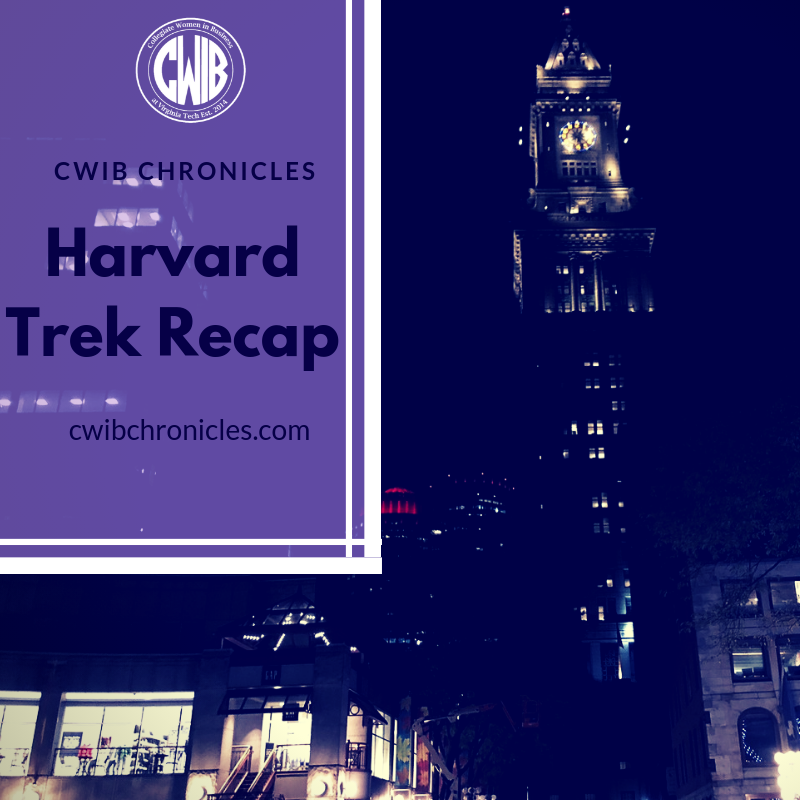 On October 27th – 29th, CWIB members, Caitlin Nguyen, Andrea Pena Matheus, Gabrielle Bryda, and Neha Shah, traveled to Boston, Massachusetts to attend the Intercollegiate Business Convention (IBC), the largest student-run business conference in the world, hosted by Harvard Undergraduate Women in Business. Founded in 2005, the Intercollegiate Business Convention (IBC) is striving for expansion and equality in hopes to bring the experience to as many young women as possible according to the IBC Website.

The trek goers also met with VT alumni at MSLGroup, a global public relations and communications company and Akamai, an internet security company. Of course, they managed to fit in time to explore the lively city of Boston in the evening! It was a productive and memorable weekend for these CWIB ladies in Boston!

Caitlin Nguyen, a freshman business undecided major, chose to go on the trek to attend the esteemed Intercollegiate Business Convention and hear from successful businesswomen about their stories and what inspires them. Caitlin is drawn to the diverse network in Boston and can picture herself working there in the future! Her favorite part of the trek was the breakout sessions at IBC, because she was able to build personal connections by introducing herself to the speakers that inspired her. Huda Kattan was one of the IBC speakers that inspired Caitlin. An internationally recognized makeup guru, content-creator, and co-founder of Huda Beauty, Kattan went against the norms of her culture and family to grow her social media following and start a beauty brand that offers groundbreaking products according to the IBC Website. “Her story spoke volumes to how hard work and dedication can make any average woman a successful businesswoman in anything she is passionate about,” Nguyen told The CWIB Chronicles.

“I gained knowledge on not only what it takes to become a “successful” entrepreneur and businesswoman, but the trek also drove a strong work ethic within every woman who attended, as we all seek equality and power to be heard in our future.” – Caitlin Nguyen

Computational & Systems Neuroscience and Economics double major, Gabrielle Bryda, shares that she also enjoyed the breakout sessions at IBC, namely the “Connecting with Business Schools” session. “This session was extremely beneficial for me and confirmed my decision to pursue my MBA after working for a few years post-graduation. I learned valuable information about how to boost my application for business school and was given the opportunity to network with directors of admissions at various top business schools,” Gabrielle told The CWIB Chronicles. Gabrielle shares that she enjoyed the company visit to Akamai because she sees herself working in the technology industry and got to have a conversation with a hokie alumnus and his co-workers!

Andrea Matheus, a sophomore Marketing and Management double major and International Business minor shares that this was her favorite CWIB trek she has been on so far, because of the opportunity to attend a business conference featuring inspirational women speakers and also visit companies to get an inside look at the corporate world. “My favorite part was getting to hear some of the panelists and making a strong connection with some of them,” Andrea tells The CWIB Chronicles. Andrea shares that she networked with a woman who works in an ad agency and attended portfolio school, which is what she hopes to do after she graduates! 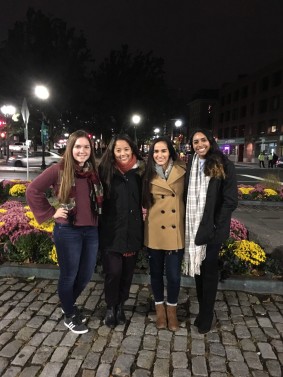 CWIB is proud of Caitlin, Andrea, Gabrielle, and Neha for taking a weekend to explore Boston and attend the Intercollegiate Business Convention! Writing this recap definitely made me recall how exciting of an experience participating in last year’s trek was! We are so glad they returned inspired and motivated by trek and we wish them luck in their future endeavors!

CWIB Chronicles is a weekly resource for the members of Collegiate Women in Business at Virginia Tech and the greater business community. With each post, we aim to empower, prepare and connect readers with valuable content to help launch and propel their business careers.